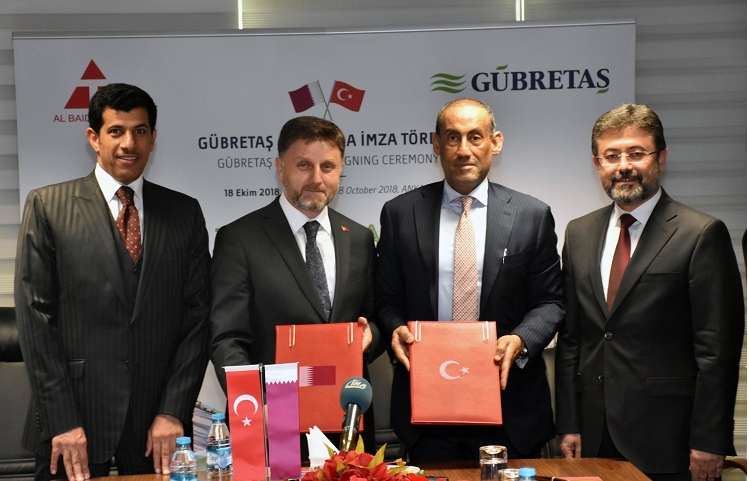 With the aim of providing added value to the national economy, GÜBRETAŞ continues its activities in the field of export intensively and will deliver plant nutrition products to Qatar as well as Oman and Kuwait markets with its distributorship agreement with Al Baida Group from Qatar. The main distributorship agreement between GÜBRETAŞ and Al Baida aims to increase the trade volume between two companies to a value of USD 10 million within a few years.

Following the biggest foreign plant investment in 2008 GÜBRETAS, a leading company in plant nutrition industry in Turkey, continues to lead the industry by export activities in the international arena. Making a strong move in Turkey’s export target line, GÜBRETAŞ begins to have the fruits of their labour in the international export market it started in 2017.

One of the largest company in the Agricultural Credit Cooperatives of Turkey, GÜBRETAŞ has made fertilizer exports to many countries such as Turkish Republic of Northern Cyprus, Ukraine, Georgia, Afghanistan and Azerbaijan and most particularly to Qatar since last year after such studies.

Within the aim of providing added value to the national economy, GÜBRETAŞ continues its activities in the field of export intensively and will deliver plant nutrition products to Qatar as well as Oman and Kuwait markets with its distributorship agreement with Al Baida Group from Qatar.

Analyzing the data of 11 thousand agricultural land across the country within the project conducted by Turkey Soil Productivity Map particularly since 2006 and based on these data, GÜBRETAŞ develops plant and region-specific fertilizers and carries out innovative works in the field of production.

Product-specific fertilizers developed during this project process have become an important example in terms of turning R & D added value into the contribution to the national economy as the starting point of GÜBRETAŞ’s export operations.

In 2017, GÜBRETAŞ focused on the exportation of various products produced in its plants to target overseas markets, particularly those plant and region-specific fertilizers that provide great productivity and quality increase in the agriculture of the country. In this context, efforts are underway to establish a basis for cooperation with important companies of these countries for the export of fertilizers to more than 10 countries such as Turkish Republic of Northern Cyprus and Qatar, Azerbaijan, Georgia, Ukraine, Afghanistan, Iraq and Morocco.

GÜBRETAŞ, aiming to deliver its products to the Middle East, Central Asian Turkic Republics and African markets as well as the surrounding countries, has drawn a significant cooperation agreement with Qatar.

Within the scope of the commercial relationship with the Al Baida Group, one of the largest companies in Qatar, 485 tons of liquid-powder fertilizer was exported in the first 9 months of 2018, and studies are being performed to create a market. It is aimed to increase the trade volume between the two companies rapidly and reach a value of USD 10 million in a few years.

Al Baida Group will deliver GÜBRETAŞ products to Qatar as well as Oman and Kuwait markets in the region.

Speaking at the ceremony, Chairman of the Board of Al Baida Group Ali Al-Misnad, focusing on the importance of food and agriculture in Qatar due to last year’s embargo on regional countries, “The food shortage that we encountered as a country during this embargo led us to make decision to produce our own agricultural products by turning to agriculture. As one of the largest companies in Qatar during the embargo process, we have seen that in order to increase the agricultural production of the country we need to achieve the highest productivity in our agricultural land. In this respect, chemical fertilizer has become more important as one of the most critical agricultural inputs for us.”

Ali Al-Misnad moreover says they met GÜBRETAŞ during this period and states, “We have seen a great opportunity in plant-specific fertilizers formed with deep-rooted corporate experience of GÜBRETAŞ in Turkish agriculture during our negotiations last year.  Using these fertilizers, we have started to increase productivity and quality on our own 6,000 acres of land”.

“Thanks to the distributorship agreement, we will contribute to  increase of agricultural production in our country by using these products in other agricultural lands in Qatar,” continues Ali Al-Misnad, stating they will also sell the products of GÜBRETAŞ to Omman and Kuwait where they have commercial activities.

“Expanding this cooperation in the field of agricultural production within a relatively short period of time, we are pleased and honored to be the brotherhood that will contribute to generating mutual benefits between Turkey and Qatar,” Al-Misnad said.

GÜBRETAŞ BOARD CHAIRMAN FAHRETTİN POYRAZ: THIS COOPERATION BETWEEN TWO BROTHER COUNTRIES WILL GROW FASTER WITH THE PARTICIPATION OF OTHER COMPANIES ”

Speaking at the signing ceremony, General Director of the Central Union of Agricultural Credit Cooperatives and also Chairman of the Board of GÜBRETAŞ, Fahrettin Poyraz, suggests, ”  “This agreement is an important milestone for the development of fraternal ties between Qatar and Turkey and for agricultural development between the two countries, one of the most strategic sectors”.

Dr. Fahrettin Poyraz states GÜBRETAŞ has the widest range of products in the plant nutrition sector in Turkey, and turning to exports is one of the most significant moves lateyl for the company and says, “As the Agricultural Credit family, we consider what we can do internationally with all our companies, especially GÜBRETAŞ, in order to provide added value to the national economy. Signing the largest industrial investment of Turkey in the overseas 10 years ago, GÜBRETAŞ has started to sell fertilizers to foreign countries by transforming its R & D know-how into added value with the export activities it has started since 2017. Our other agricultural credit companies increase their exports to many countries on different continents, too.”

Reminding that GÜBRETAŞ has made a fertilizer export connection to more than 10 countries within a year, Board Chairman Poyraz says, “In addition to Qatar, we aim to increase the volume of fertilizer to 10 million USD in the next few years with Al Baida company, which we have made the main distributorship agreement for Kuwait and Oman in the region, ”he said.

Fahrettin Poyraz says “we hope this commercial corporation started between GÜBRETAŞ and Al Baida Group will not be only limited with fertilizers and it transform into a fast-growing synergy that covers the different segments of the agricultural sectors of both Turkey and Qatar.  For this purpose, we will also carry out agricultural cooperations with other companies in different areas such as crop protection, food supply, irrigation and greenhouse systems and seed production within the scope of Agriculture Credit and that this cooperation and trade volume in agriculture will be increased.”

GÜBRETAŞ GENERAL MANAGER IBRAHIM YUMAKLI: “WE TRANSFORMED OUR R&D EXPERIENCE TO EXPORTS AND EXPORTS TO KNOWLEDGE”

İbrahim Yumaklı, the General Manager of GÜBRETAŞ who delivers his opinion on the subject, says, “first off, I think that the distributorship agreement we have signed with Al Baida Group is a good cooperation for the agricultural sectors of the two countries and it will result in fruitful results for both countries.  In the second half of 2017, we continue to create fertilizer export areas in different countries where we concentrate, where we have increased this year. ”

İbrahim Yumaklı suggests they will support these commercial activities initiated by carrying out 66 years of institutional knowledge of GÜBRETAŞ abroad and also says, “We have taken the first steps in this direction in the Turkish Republic of Northern Cyprus and Azerbaijan last year. With the conscious agricultural education and soil analysis we pioneered in Turkey, we began to move our approach abroad together with our products. Thus, in addition to the plant nutrition products we sell, we also produce value for agricultural productivity in those countries. Similar studies will continue in the form of soil analysis of agricultural land in Qatar and contribution to conscious agricultural studies.”