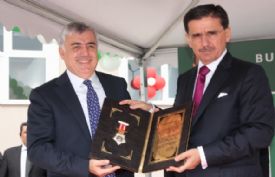 The industry-leading GÜBRETAŞ (Gübre Fabrikaları T.A.Ş.), who has been contributing to Yarımca’s economy and employment with its facilities since 1961, has now opened a brand new and modern educational establishment in Kocaeli. Built as a social responsibility project in commemoration of the company’s 60th anniversary, Başiskele GÜBRETAŞ Elementary School was constructed according to EU Construction Standards and consists of 4 floors, 24 classrooms and has a capacity of 720 students. The school which was built in Paşadağ Mahallesi in Yuvacık district also has 19 different social domains such as laboratories for disabled students.

GÜBRETAŞ, who stands out emphasizing the importance of education in the field of social responsibility, built two different schools in two different cities in commemoration of the company’s 60th establishment anniversary. A secondary school built by GÜBRETAŞ in Hatay-İskenderun was opened in 2013. The decision to build the GÜBRETAŞ Elementary School in Başiskele was taken with a protocol signed with the Governorship of Kocaeli and started its construction after the planning phase a year ago. The school’s construction was completed in 9 months and it was transferred to Provincial Directorate for National Education. New students and teaching staff met with their new school and started the new school year.

Every year, GÜBRETAŞ, who is continuing its work in education within the field of social responsibility, is educating 150.000 farmers and agricultural engineers in conscious agriculture throughout 2.000 different spots spread across Turkey. The company, who is providing scholarship to the children of farmers studying in the faculty of agriculture, crowned its support to education with the new school buildings.