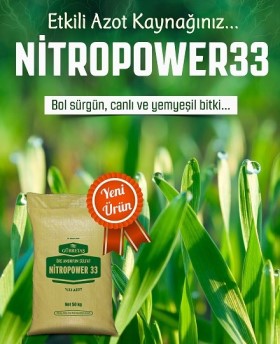 The new product of GÜBRETAŞ, Nitropower33, was launched. NITROPOWER33, a nitrogenous fertilizer in granular form, contains urea and ammonia nitrogen. Nitropower33 does not contain nitrogen in nitrate form. Our new product Nitropower33 can be used as a source of nitrogen for cereals, industrial plants, fruits, vegetables, legumes and all other plants.

Since the organic matter content of our country’s soil is low, nitrogen deficiency is seen in 80% of our soils.  The nitrogen present in the soil is also consumed by plants, washed down from the soil layers, disappears in the form of gas or is destroyed by erosion.

Due to the presence of sulfur, the effect of Nitropower33 to the plant will be faster and longer.

Nitrogen requirements of plants are high in vegetative development period, and that the lime content of the soils in Turkey and accordingly their pH are relatively high causes plants to have nutrient problems.

When should Nitropower33 be used?

The entire amount to be used should be applied in two or more pieces, not at once. Thus, nitrogen will provide more benefits to the development of the plant.

Since nitrogen is used by plants especially in the structure of proteins, problems such as pale green color formation, shortening of stem, shrinkage of leaves and premature ripening start in the absence of nitrogen because it is very important for the development of vegetative parts. Nitrowoper33 fully meets the nitrogen requirement of plants with high nitrogen content.

NITROPOWER 33, which is a nitrogenous fertilizer in granular form, contains 20 percent sulfur trioxide and 25 percent urea nitrogen and 8 percent ammonia nitrogen. Nitropower 33 does not contain nitrogen in nitrate form.