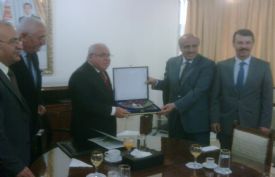 Tunisia is one of the countries having notable underground reserves such as phosphate rock, one of the fundamental raw materials of chemical fertilizers. Since Turkey is dependent on the supply of raw materials from abroad, relations of GÜBRETAŞ, the leader of the fertilizer sector, with Tunisia have long years of history.

Recently, with the attendance of the GÜBRETAŞ top executives, a visit was paid to Tunisia, which became the stage of new steps in order to improve the trade and cooperation between the two countries. The representative group included Bedrettin Yıldırım and Hüseyin Akay from Agricultural Credit Cooperatives Central Union, GÜBRETAŞ General Manager Mehmet Koca and İsmail Babacan under the guidance of Mustafa Göksu, Tunisia’s Istanbul Voluntary Consul.
During the trip between the dates of 18 and 20 May 2010, the group paid a courtesy visit to Abdessalem Mansour, Minister of Agriculture of the Republic of Tunisia, and Ridha Ben Mosbah, Minister of Commerce and Handcrafts, discussed the works to be done in collaboration and invited the Ministers to Turkey. In addition to this Ministry-level visit, some of the important names met were Mabrouk Bahri, President of Tunisia Agriculture and Fishing Union; Abderrazak Rasaa, Ministry of Industry and Technology Undersecretary; Mohamed Fadhel Zerelli, President of GCT-CPG, owned by the Government of Tunisia and one of the main chemical fertilizer producers.
Making a brief evaluation regarding the trip, Gübre Fabrikaları T.A.Ş. General Manager Mehmet Koca underlined that the visit was productive for both Agricultural Credit Cooperatives and GÜBRETAŞ as well as the agriculture and trade cooperation relations between the two countries.