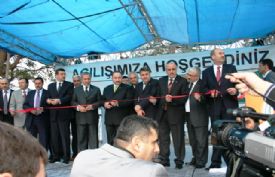 Gübre Fabrikaları T.A.Ş. (GÜBRETAŞ)and Agricultural Cooperatives Central Union, known widespread through their investments during the recent years, have undersigned a new co-investment that will serve the farmers. Established as part this collaboration, TARKİM Bitki Koruma Sanayi ve Ticaret A.Ş. will conduct manufacturing in the field of pesticides.
The facilities of TARKİM Bitki Koruma Sanayi in Manisa were put into service by a ceremony held on December 19, 2009. State Minister and Deputy Prime Minister Bülent ARINÇ, regional deputies and Governor of Manisa as well as Agricultural Credit Cooperatives and GÜBRETAŞ executives and numerous citizens have attended to the ceremony.
The pesticide production facilities of Kimyagerler Ziraat İlaçları A.Ş., involved in production activities in Manisa since 1977, were acquired at the end of 2007 by GÜBRETAŞ. After the modernization work carried out in the factory, GÜBRETAŞ made cooperation with Agricultural Credit Cooperatives through its widespread distribution network and completed the foundation of TARKİM in April.
TARKİM produces plant protection products such as WP, EC, SL and DS in powder and liquid forms in its modern factory building spanning a total area of 20.000 m2. Approximately 4.000 m2 of the total area is closed, and the total annual production capacity of the plant is 12.800 tons.
GÜBRETAŞ has 40% and Agricultural Credit Cooperatives have 60% partnership share in TARKİM investment in the sector of plant protection and pesticides, occupying a 600-million-dollar market size.