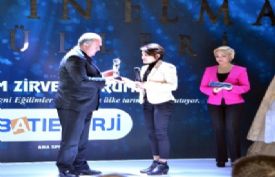 Embracing the “we enrich these lands” principle and speeding up the social responsibility projects in the recent years, the industry leading GÜBRETAŞ, won the Social Responsibility award in the 3rd Platinum Apple Awards (Platin Elma Ödülleri).

With the support of Ministry of Food, Agriculture and Livestock, Platinum Apple Awards are organized by Eğirdir Governorship and Platinum Apple Association since 2012. This year, the juries decided to give GÜBRETAŞ, the Social Responsibility Award.

The 3rd National Platinum Apple Awards, where the representatives from the leading companies in agriculture industry, academicians and entrepreneurs gathered was held at Sirene Davras Hotel in Isparta-Eğirdir in 10 January 2015. As a part of the event, the Agricultural Summit Forum was held in 3 different sessions. The problems and the future visions of the agricultural industry was discussed and reviewed. The general results from the forums were shared with the attendees before the award ceremony.

GÜBRETAŞ Deputy General Manager Tahir Okutan, who attended the forum as a speech giver, said that steadily growing GÜBRETAŞ is leading the agricultural industry with the Turkey’s Soil Fertility Map project and many other social responsibility activities. Tahir Okutan also reminded that GÜBRETAŞ is educating 150.000 farmers in conscious agriculture throughout 2.000 different spots across Turkey every year and added: “Alongside the educations, we are running many different social responsibility projects, following our ‘we enrich these lands’ principle. The Soil Fertility Map Project which started in 2005, awarding scholarship to faculty of agriculture students, the schools we built in different cities and different activities devoted to female farmers are the projects that we embraced since our establishment.”