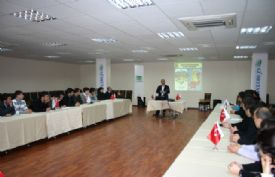 GÜBRETAŞ extends four-year non-refundable education grants to students from low income families who have recently enrolled in agricultural faculties. The Education Grant Project started as a social responsibility effort four years ago. The students who started to benefit from this grant in the academic year of 2007-2008 will graduate as an agricultural engineer at the end of this semester and enter upon a career.

A total of 81 university students from 25 agricultural faculties in Turkey who have been benefiting from the GÜBRETAŞ Education Grant came together in Yalova as part of an event organized by the firm on the occasion of semester holiday on February 4-5-6, 2011.

As part of the event which started with a visit to production plants of GÜBRETAŞ in Kocaeli-Yarımca on February 5, 2011, presentations were made and then factories and laboratories were toured. The Garden Cultures Research Institute in Yalova and a special integrated and cultivated area in the region were visited and a briefing was provided by officials on February 6. Furthermore, as part of two-day seminars which were organized at the hotel, scholarship students were given training aimed at supporting career plans in agriculture and personal development.

As a result of the event in which students from various provinces in Turkey joined together with sociable activities, a farewell dinner was organized on February 5, 2011. At the end of the meeting attended by GÜBRETAŞ General Director Mehmet Koca and Deputy General Directors Tahir Okutan and Osman Balta, gifts and certificates of attendance were given to students.

Speaking at the meeting, General Director Mehmet Koca said that GÜBRETAŞ has been maintaining its role as a sector leader with social responsibility projects related with agriculture. Mehmet Koca added, “In line with this sensitivity, we have been developing our cooperation with universities and extending scholarship to agricultural faculty students, because we believe that these efforts are important for the future of agriculture. We hope that our scholarship students will furnish great services as part of a good career in sector in the future.”