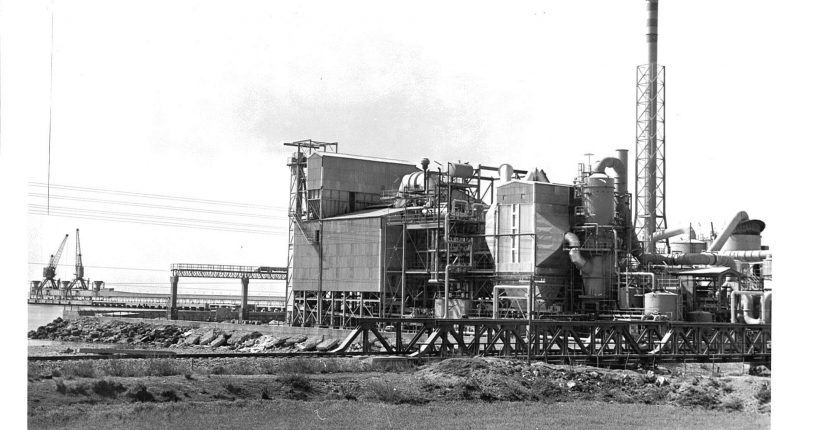 GÜBRETAŞ was founded in 1952 with the declaration of Ministerial Cabinet leaded by Adnan Menderes, continues to contribute the increase of fertility and quality in agricultural production.

AA – KOCAELİ (Kadir Yıldız) Gübre Fabrikaları Türk A.Ş. was founded in 6 November 1952 through the declaration of Ministerial Cabinet leaded by Adnan Menderes in order to provide gain by chemical fertilizers, maintains to contribute fertility and quality increase by its R&D studies and innovative products it has been leading for 68 years in the sector. In his first public speech when Prime Minister and chairman of Democrat Party Adnan Menderes won the general elections in 14 May 1950, he indicated that 80% of Turkey’s population live in rural areas and thereby not only agricultural investments and encouragements but also fertilizers and agricultural machines are going to be provided for farmers and villagers.

GÜBRETAŞ was founded in 6 November 1952 through decision of Ministerial Cabinet leaded by Menderes who foresaw the huge potential of agricultural industry for the development of Turkey by feasibility studies done in that period of time.

First chemical fertilizer factory of Turkey was launched in Iskenderun/Sarıseki in 1954 by GÜBRETAŞ. In the factory whose production capacity is 100 thousand tons annually, NSP (Normal Super Phosphate) Fertilizer was released to the market.

The second factory which has 100 thousand ton capacity as well was launched in Kocaeli Yarımca in 1954. Istanbul Stock Exchange started up as the name of Borsa İstanbul in 1986. GÜBRETAŞ, by being offered to public, became a chain of finance sector and one of the 15 companies that are traded from the very first day. GÜBRETAŞ continues to work increasingly and performs important studies since it was founded in order to supply fertility and quality for the agriculture of Turkey.

GÜBRETAŞ assists its leadership in the market with its R&D studies and consulting services given online and in the land itself, soil analysis education programs and prescribings, conscious farmer meetings and model field activities in order to generalise term “conscious agriculture” concentrated particularly for recent years.

The company celebrated its 68th birthday, keeps its leadership in sector with 31% market share by increasing its annually production capacity to 1 million tons and sales amount from 19 thousand 500 tons to 1 million 900 thousand in solid-liquid-powder group since 1954.

“The company owned by people keeps its leadership successfully in sector” 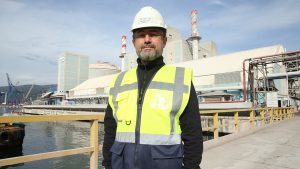 Yumaklı expressed that GÜBRETAŞ initiated the process of investment on production facility in order to produce first domestic fertilizer immediately just after its foundation, also reminded that the first domestic fertilizer factory was launched by the former president Celal Bayar and industry minister Bekir Sırçalı in the region of İskenderun/Hatay in Turkey. Furthermore Yumaklı continued: NSP type fertilizer production started in its first factory with 100 thousands ton capacity and presented for the usage of Anatolian farmers.

GÜBRETAŞ started its journey of domestic and national production and many other facility investments have been made so far reached until today by the second factory established in Kocaeli in 1961. We are now celebrating our 68th birthday by 6th of November. Our company keeps its seccessful and stable leadership in the sector as a company owned 100% by public owing to be a subsidiary of Agricultural Credit Cooperatives obtains 75% of our share while the rest 25% was offered to public after the privatization in 1993. Moreover GÜBRETAŞ developed more reputation by foreign investments made particularly in last 15 years.

Yumaklı who reminded the establishment target of the company was to expand chemical ferzilizer usage which were not common in that period of time, also stated: After 1940s faced with 2nd World War and after some years, by the start of 1950s, Turkey’s population was still living in rural areas.

Yumaklı stressed that, the public not only strived for independence by paying heavy prices but also had to cope with appalling conditions of 2nd World War. Certain agricultural factories and states institiutions were started to be launched like “Agricultural Equipment İnstitution” in order to increase agricultural during the rule of Prime Minister Menderes in 1950s. When tractor number was around 1800 in 1948, it turned to be 44.000 by 1957 and the number of combine harvester was around 6.000. In such a condition establishment of GÜBRETAŞ was a milestone to increase fertility in agriculture. Once upon a time, the capacity of Turkey’s first fertilizer company was 100 thousand ton. At the present time GÜBRETAŞ’s capacity of producing solid fertilizer only is 985 thousand ton and liquid-powder fertilizer capacity is 100 thousand ton. Today annual production capacity of fertilizer sector in Turkey including the other fertilizer companies is nearly 6 million ton. In last 15 years, Turkey was the 1st in Europe and 7th in the world in terms of agricultural production. GÜBRETAŞ and the other companies which were built by Adnan Menderes for agricultural development made a significant contribution to these results reached.  In this sense,  we see 68 years old story of GÜBRETAŞ as a summary of Turkey’s growth in industrial and agricultural production started by Adnan Menderes.

Yumaklı, did not only expressed that Adnan Menderes was a very significant name in social and political life of Turkey, but also stated that he had an important role for self-confidence recovery of our country’s public and land with the movement of national industry and domestic production and gain of sentimental values he initiated after very hard years. 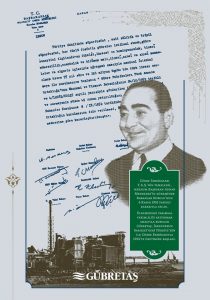 Yumaklı expressed that they tabularized the document declares the foundation of GÜBRETAŞ, called this document as a feather in GÜBRETAŞ’s cap.

Yumaklı also indicated that not only GÜBRETAŞ which was built 68 years ago but also other factories and investments founded with the signs of Menderes’s government allowed thousands of people to be employed. He depicted the established factories in that period to “seeds” which turned into fruitful plants and still keep contributing to Turkish economy.

Yumaklı who specified GÜBRETAŞ which functioned successfully so far up to the present as an outcome of rearing era in Turkish politics and economy also remarked these:

As GÜBRETAŞ, we consider the document signed by Menderes and his friends as an honour. We believe that the issues Menderes pointed out 68 years ago are still quite crucial for the growth of agriculture and agricultural economy.

We continue to contribute to agriculture with our activities based on generalising “conscious agriculture” term particularly in last 3 years and social responsilibility in order to carry the develeopment of the county mission into future. Turkish agriculture sector remembers Menderes with mercy and gratitude. 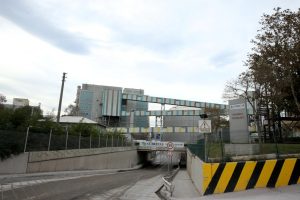 Additionally we serve more than 110 different fertilizer type in 2 thousand 700 selling point including 1 thousand 800 ones owned by Turkish Agricultural Credit Cooperatives. On the other hand we continue to lead the sector with our domestic and international investments. We will be actualizing majority of our investments by the end of year. Operation of expanding harbour in Yarımca is very significant for the efficient continuity of our activities. We launched the logistics center in İskenderun by the end of September. Thereby our storage capacity increased to 472 thousans ton.

We will continue our investments to strength GÜBRETAŞ not only in Kocaeli Yarımca or Iskenderun but also in every region we are actively working.