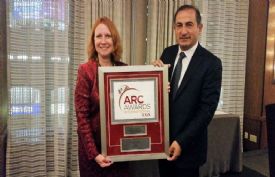 GÜBRETAŞ is awarded the ‘Best of Turkey’ award in the field of annual financial reporting during ‘Grand Award Winners’ evaluation, where the best ones were determined in the 29th International ARC Awards award platform and it has been awarded a total of 3 Silver Awards in international competitions so far this year.

An award ceremony is held in New York for the 29th international ARC Awards, known as the ’Oscars of Annual Reports’, in which 2100 applications from 35 countries were assessed this year. General Manager Şükrü Kutlu, who receives the “Best of Turkey” award on behalf of GÜBRETAŞ, delivered a short speech at the ceremony and thanked those who contributed it.

ARC Awards, which was first organized by the independent MerComm in 1987, is a prestigious award platform created to reward excellence in activity reports and encourage creative, original designs and promising creative works. The preliminary and final jury of the competition consists of senior executives and writers, designers and photographers from 60 different institutions in many different countries around the globe.

Published in two languages, Turkish and English, GÜBRETAŞ Annual Report is prepared by the Graffiti agency, which has won numerous international design awards. The project is directed by Elif Özgüzelbaş, while the illustrations of the project are drawn by Spanish illustrator Juan Hernaz for the report and portrait photos are taken by Mehmet Geçit, which adds visual richness to the work.