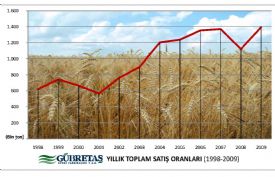 Gübre Fabrikaları T.A.Ş. (GÜBRETAŞ), the leading brand in the chemical fertilizer sector, raised its fertilizer sales from 1 million 120 thousand tons in 2008 to 1 million 395 thousand tons in 2009 achieving a 25 percent increase and reaching the highest sales rate of its 58-year history.
Possessing a very strong logistic network throughout Turkey with a total of 2,731 sales points, 1,852 of which are Agricultural Credit Cooperatives and 879 are private dealers, GÜBRETAŞ has recently become one of the attention drawing brands through its numerous and successive initiatives in the agricultural and industrial sectors.
GÜBRETAŞ has achieved a great success despite the global crisis by increasing its annual total sales to 1 million 395 thousand tons in 2009. The increase, which is 94 % on the 10 year basis (742,798 tons in 1999), has reached a record-high level with the 25 % increase on the 2008 figure of 1,120,000 tons.
GÜBRETAŞ General Manager, Mehmet Koca made a statement regarding this issue and said: “We closed the year 2008 with Razi investment in Iran despite the global crisis. Although we declared loss in 2009 due to dependence on raw materials from abroad, we have now completed the year by achieving a historical sales record and by increasing our market share”.
Pointing out that it is more important to maintain a success than to achieve it, Mehmet Koca said: “successive leaps of GÜBRETAŞ, specifically after the year 2004, have become the manifestation of our success philosophy. Therefore, catching a historical success in a year marked by the crisis talks is a significant pride for all of us”.
Stating that this success was also a reflection of the normalization in the agriculture sector, General Manager Mehmet Koca said that this situation was a satisfying development for Turkish farmers and the country’s economy. Mehmet Koca has indicated that he believed the increase in productivity would continue along with the normalization in agriculture and said: “We are hopeful for 2010, 2011 and the following years, and as long as these positive developments exist, our social developments will continue.”