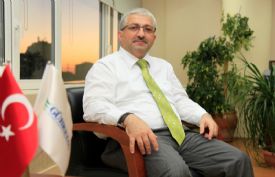 In the July issue of BUSINESS, a monthly business and economy magazine, “The Most Successful CEOs of the Crisis” topic was covered.
As a result of the evaluation of 236 companies open to the public and having a significant share in Turkey’s economy, the most successful executives were determined with respect to their performances in 2009 in which the global crisis was dominating. GÜBRETAŞ General Manager Mehmet Koca ranked 36th on the list.

In the research taking the last 6 years’ balance sheets of the firms into consideration, parameters such as company turnovers, profits, and employment increases were principally assessed. According to the scoring determined by these parameters, an evaluation based upon a 100-point average was conducted.

On the list Alarko Holding executive Ayhan Yavrucu ranked first with 66.72 points, and Gübre Fabrikaları T.A.Ş. General Manager Mehmet Koca ranked 36th with 52.54 points. This success of Mr. Koca who has been serving as the General Manager since 2006, is the demonstration of GÜBRETAŞ’ rapid rise in the recent years.