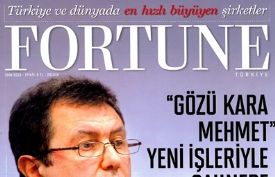 Gübre Fabrikaları T.A.Ş. that continues to increase its share in the sector through its successful commercial activities during the recent years keeps drawing attentions via the significant investments it makes domestically and internationally as well. Through this performance, having been in the first 50 on the list in the stock market, GÜBRETAŞ has become one of the leading brands that produces added value among the biggest industrial companies.
The performance of the company during the recent years also comes to the forefront on the evaluation lists prepared by various institutions and publications. Lastly, according to the research conducted by FORTUNE magazine, GÜBRETAŞ became the first among “50 Fastest Growing Company in Turkey”.
One of the most prominent publications of the world of business, FORTUNE magazine dealt with on the fastest growing companies in Turkey and in the world in its October issue with the file titled “Rising Stars.” In the list prepared with respect to the financial data for the last three years of the companies, GÜBRETAŞ ranked first in total revenue with 161% average point and it realized increases for the profit per share as 304 % and for net sales as 51% on the average in three years.
On the list, the evaluation regarding GÜBRETAŞ was, “One of the leading firms of the chemical fertilizer sector, GÜBRETAŞ did not suspend its investments even during the crisis in which many of the companies were reluctant. It also attracts attention by granting cash dividends to its shareholders.
During the term of 2009, the company had declared losses due to the crisis and it returned into a profitable period again in 2010. It increased its production capacity this year. The turnover objective of the company for the current year is 1,5 billion TL, and the consolidated net profit target is about 150 million TL.”